I might be rambling a bit in todays post, but instead of my usual 10-page article blog posts I had something I wanted to get off my chest today, so I’m going to keep it short. Relatively speaking, for those who know me…

The concept of the id, ego and super-ego originates from Freud. Basically, the id is defined as the unorganized part of your personality which contains your basic and instinctual needs. It works mainly unconsciously, to avoid pain or discomfort. The ego works more consciously and to benefit the id long-term. The super-ego aims for perfection, and is formed by parents, teachers, mentors and authorities.

Now, I won’t profess to have delved deep into the theory of this, I mostly picked it up from a Google search but it serves as a good intro to what I wanted to say. Notice that these are a blend of internal and external driven processes, your instinctual needs and wants, and what (you think) people you trust in expect from you.

The premise of “the Secret” and similar philosophies is a nice one: focus on what you want to attract. However, as a friend of mine, reknowned hypnotherapist and NLP practictioner Jørgen Rasmussen said: “the Secret has created more depressed and neurotic people than I could ever imagine”. See, if people think that whatever crap happens to them happened because they simply thought about it, you will fear ever thinking about death, plane or car crashes, or just slipping and falling when crossing the floor. And don’t think of a pink elephant. You thought of a pink elephant. An evil and self-destructive circle is created because you can’t not think about the things you know you shouldn’t think about because it will make it happen to you. Or something like that, I think you know what I mean.

Nonetheless, it is completely asinine and a complete misunderstanding about how the universe works. Although it is true that focusing on your goals is more productive than focusing on what you want to avoid, you’re not this big magnetic thought generator which can create your reality in an instant. It is a little more involved than that. 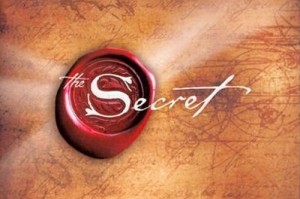 I have touched upon this subject before, but it bears repeating. Modern times have created a situation where the super-ego has become inflated artificially and to the brink of destruction. We are connected more than ever before, carrying around our smart phones and tablets even when taking a dump. The id, ego and super-ego in a giant mish-mash of status updates and pictures of every second of their lives, through social media such as Facebook, Twitter, Instagram and blogs…to name but a few. The limits of privacy have been moved beyond recognition and in many cases obliterated.

It has become a competition of how to be the most awesome. Who’s got the most friends, the best travels and experiences, the cutest boy/girlfriend/baby/dog/sixpack abs? See, on a fundamental level I think connecting people is healthy and being able to hook up with your high-school sweetheart is awesome, but it can be a dangerous thing…you lose perspective of what “being awesome” is all about as you see everyone around you seemingly living perfect lives, at least compared to you. And your high-school sweetheart turned out to be an axe murderer. With chlamydia.

No matter what you can make yourself feel good about, someone else is always going to be better. Some of you start living your life with a sense of incompleteness. You are not perfect and you know it. Well, I think I have to remind you if you are thinking and feeling it, so is everyone else – hence the need to make it APPEAR that they are. Most people post something when they want to show off or tell you about something they are proud of. You are seeing a tiny snapshot of their lives, you are not there to share every living second of it. Although many seem intent on doing just that: 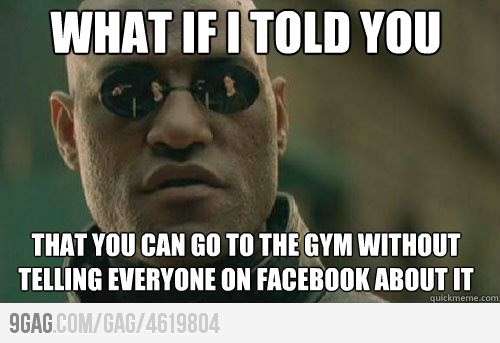 I intentionally don’t post personal stuff of any significance. My life isnt perfect, it never was it never will be. But I have made myself feel good about it anyway. I constantly learn new things and work with myself on a physical, emotional and spiritual level. I get to make other people feel good about themselves on a physical, emotional and spiritual level. Posting a training or food log or pictures of my new car isn’t going to improve someones life noticeably. Ok, I sinned in that regard just the other day on facebook, but my car is pretty cool damnit!

I see this “disease” every day, in two often observed examples and since they both incidentally popped up in my inbox this morning it inspired me to write this blog post:

1. People send me pictures of their ideal physique, this is what they want to look like. So please set up the program and diet that will achieve this. Also seen when I post before-after pictures of one of my clients, people want THAT diet and THAT training program so they, too, can look like that.

2. People send me progress reports and logs where they missed a meal, or forgot an exercise, or they were particularly tired, depressed, hungry, bitchy or whatever “negative” feeling or emotion happened to go on in their lives that day. They have to admit imperfection and now their whole life sucks. The rest doesn’t even matter now.

Well, I hate to break it to you, but here’s the truth: You can’t look like someone else, and you cannot be perfect every day.

You are a simple human being, a tiny speck of a biological organism on this relatively tiny planet in an infinite universe – at least according to Stephen Hawking.

You can only become a more aesthetically pleasing and healthier version of yourself. And it doesn’t even require that you do everything 100% perfect 100% of the time. Not only is that completely unrealistic, it sets up a situation where nothing will ever be good enough, and since you can’t achieve results by being less than perfect you might as well give up before you even begin, right? Wrong.

Let me introduce you to the 80/10/10 rule I use.  It is quite similar to the Pareto principle, just with a couple of important nuances.

80% is good enough and will drive most of your success.
10% might be near perfection and completely awesome and enjoyable
10% can be complete and utter failure

You will still be just fine and (probably) reach all your goals in the end, just by allowing yourself some flexibility and room for failure. We are all human, after all. Start enjoying the process and being more in the now – not in the past, not in the future, and even more important – not in someone ELSE’s past, now or future. You won’t get what you want by following someone else’s diet or training program or strategy, or you would also have to share their DNA and tread every footstep in every part of their life.

You have to see what you have been doing, what you are doing now, and where you want to go – then make the proper adjustments to your strategy. Walk your own path. Celebrate daily accomplishments, own your failures but don’t delve in them – learn and move on.

This is my cover photo on Facebook and it says it all. Now go and be fucking awesome. 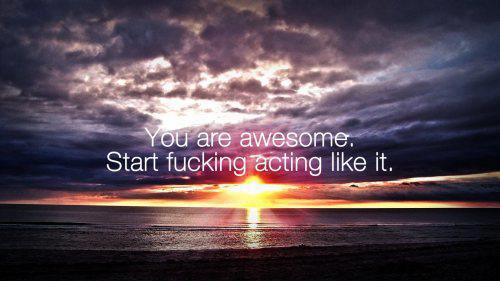 9 Comments on “Be awesome”